Home > Articles > Gamers dont let your antivirus slow you down

Gamers: Don't Let Your Antivirus Slow You Down

How an Antivirus Can Slow You Down

If you’re a keen online gamer, at some stage you will almost certainly have had the frustration of an unwanted interruption from your computer. Maybe it’s an alert to restart your device or a reminder that you need to install vital updates. Maybe it’s something as small as an email alert or social media message flagging up in the corner and distracting you. Or maybe it’s even your antivirus software popping up to tell you it’s found something suspicious during a real-time scan.

At these times, it’s understandable that you might want to shut down everything outside of your game. We get it: you don’t want anything getting in the way of your gameplay and you don’t want pop ups to slow you down. The trouble is, if you do this you aren’t playing smart. The best internet security suites are ticking along in the background all the time to keep you safe - it’s not worth letting your guard down for the sake of a few minutes’ peace.

Instead, the trick is to choose an antivirus that’s set up to accommodate what you need as a gamer - and to use the software in the most efficient way. 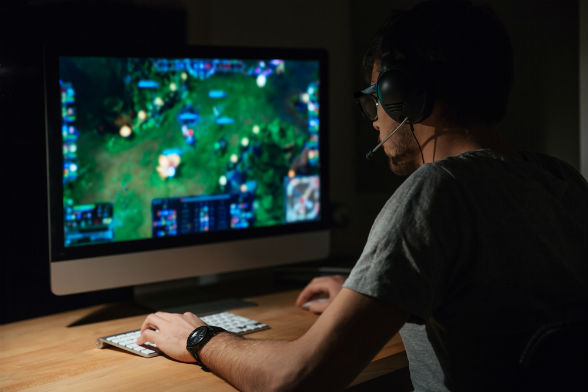 The first thing you need to think about is performance. Different antivirus packages affect your computer in different ways and some are greedier than others when it comes to eating up space on your machine – which can have huge consequences while playing. To make sure your game time isn’t affected, you’ll need to choose an internet security suite that consistently performs high in independent performance tests.

Don’t worry, we’re not suggesting you go off to do all that research yourself! You’re a gamer, not a researcher. As it happens, our expert antivirus reviews include performance as one of the key criteria. If you want to compare on this basis, have a peruse of our top antivirus reviews in depth.

Or, to save you time, we can tell you a bit more about the highest rated antivirus suites for performance that we’ve come across are; AVG, BitDefender, and TotalAV. All of these guys scored a solid 5 out of 5, meaning they’ll keep you safe without slowing you down. If you are a beginner and need an easy-to-use antivirus software, read our expert TotalAV review​ to learn more.

Next up, choose an antivirus package that comes with a specific Game Mode (also known as Gaming or Gamer mode). A number of vendors provide this as part of the package, but two that stand out as working particularly well are BitDefender and ZoneAlarm. Read our complete review on BitDefender to learn more.

When you switch your antivirus to Game mode, it temporarily puts the lid on things like product updates, permission requests, security software scans and alerts for antivirus and firewall activity - meaning you won’t get any interruptions while you’re playing. Instead, your antivirus software will wait until after you’ve exited Game Mode and then give you a summary of all the things you’ve missed in one big update.

Most importantly, this doesn’t shut off your security entirely while you’re deep in the game zone. Real-time antivirus scans and firewalls are still running as usual.

Be Cautious with Purchases

Sometimes when you are gaming you need to purchase an upgrade to get the advantage, but you need to be careful when making in-app purchases. As reluctant as you might be to have anything slow you down when you’re on a roll, never hand over your details unless you’re totally sure the site is legit.

Use your best judgement when accessing a new site and if you are unsure stick to those that are reputable and trusted. When you choose an antivirus software, pick one that has a two-way firewall, online data protection tools and password manager, keeping your sensitive info safe from prying eyes.

It’s always tempting to take the path of least resistance when you’re focused on the task (or mission) in hand.

But seriously: it’s much better to seek out an ideal antivirus security solution than to just switch off or uninstall your antivirus software out of frustration.

It might seem like an inconvenience to take a moment to switch to game mode or do some extra research before making a purchase, but that’s nothing compared to the hassles you’ll face if your PC gets infected. Malware drains your computer’s performance like nothing else - and might stop you playing at all!

This site is a free online resource that strives to offer helpful content and comparison features to its visitors. Please be advised that the operator of this site accepts advertising compensation from companies that appear on the site, and such compensation impacts the location and order in which the companies (and/or their products) are presented, and in some cases may also impact the rating that is assigned to them. To the extent that ratings appear on this site, such rating is determined by our subjective opinion and based on a methodology that aggregates our analysis of brand market share and reputation, each brand's conversion rates, compensation paid to us and general consumer interest. Company listings on this page DO NOT imply endorsement. We do not feature all providers on the market. Except as expressly set forth in our Terms of Use, all representations and warranties regarding the information presented on this page are disclaimed. The information, including pricing, which appears on this site is subject to change at any time.